We use various third-party cookies on our website to provide social media features and to analyze our traffic. You can choose to accept all cookies or customize your preference. You can change your cookie settings at any time. 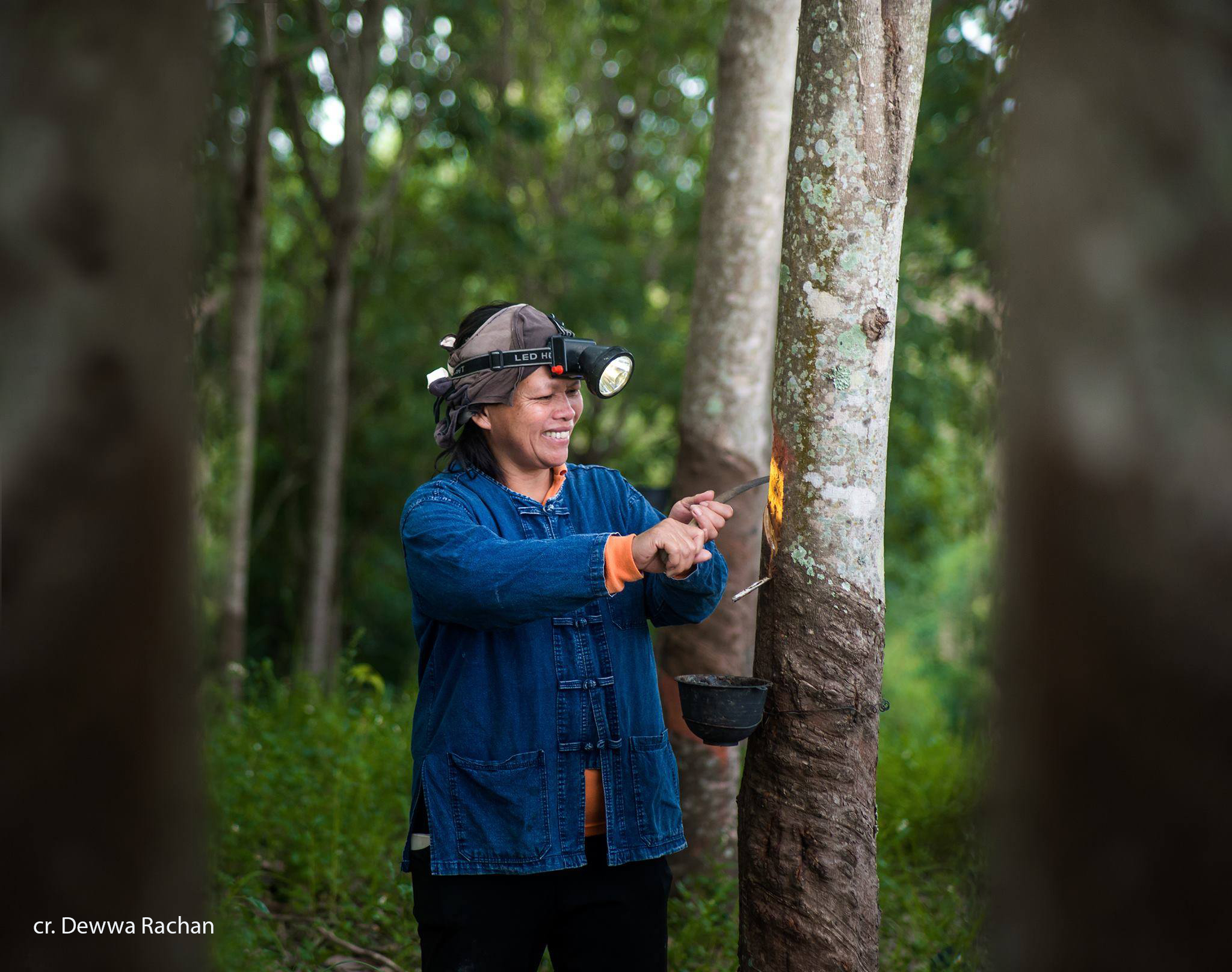 Rubber is ubiquitous in our lives. It enables the modern convenience and comfort of everything from cars to waterproof clothes. But for many of us, rubber’s origins remain hidden. Rubber’s journey typically begins in Southeast Asia, on millions of small plantations in countries like Malaysia, Vietnam, Thailand and Indonesia. Working hard on small plots, sometimes of only a few hectares, smallholders grow rubber trees that produce the latex from which rubber-based products are made. 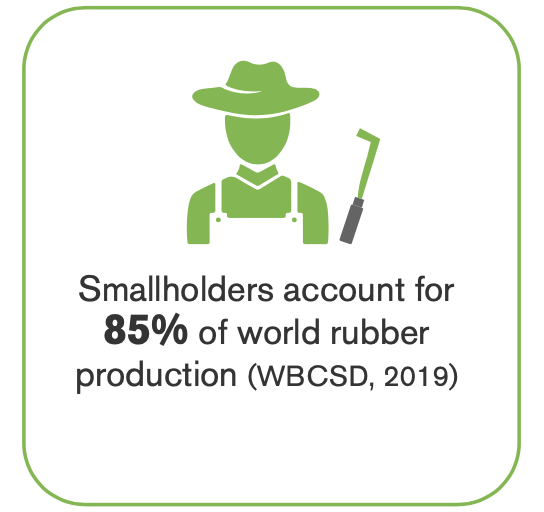 Rubber was not always grown this way. The modern trend of smallholder farms was preceded by a long history of brutal and exploitative colonial control of plantations, and even slavery, first in the South American Amazon, and later in the forests of Southeast Asia. Colonial companies forced workers to labor from dusk until dawn. Illness ran wild, injuries were common and often deadly, and medical attention was unavailable.

As formerly colonized nations gained independence, rubber plantations did, too. Large-scale colonial plantations broke apart, and new plantations were started by individual and family smallholders. Many of these were less than 5 hectares large. There are still ethical and environmental challenges associated with even small rubber plantations, but the most appalling abuses of the past have disappeared. 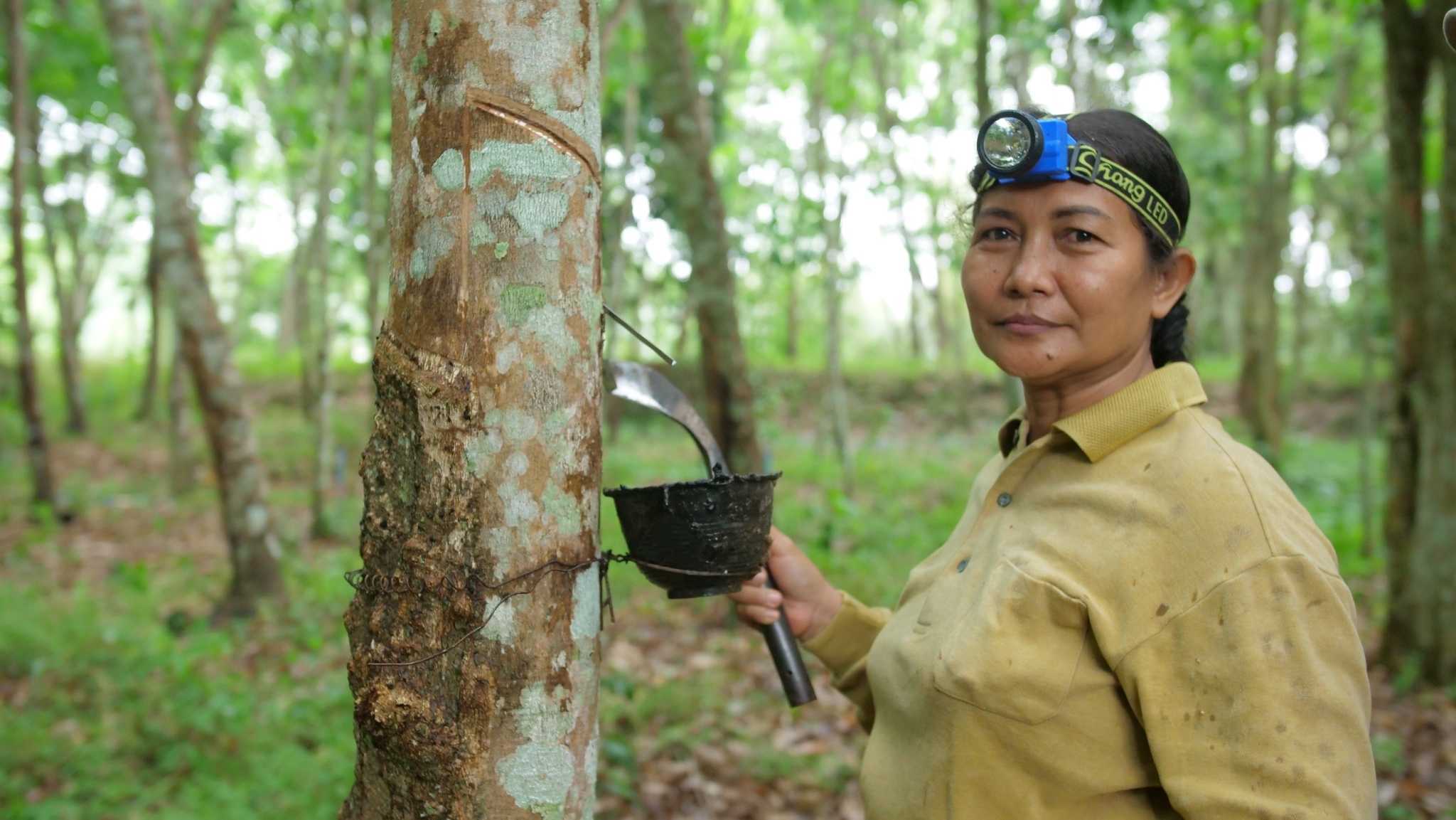 With a plantation of just 1.3 hectares, and 33 years of experience tapping rubber, Aree Khwandee is a typical smallholder. PEFC met Aree on her plantation, in Thailand’s southern Trang province, while piloting group certification for hundreds of small-scale Thai plantation owners. Aree has three daughters, and the latex rubber that she gets from her trees is the main source of Khwandee family income.

Aree’s workday starts at night, when temperatures are cooler. Rubber trees are thin and tall, but provide sparse shade. So, Aree sleeps during the heat of the day and rises at midnight to begin the work of carefully cutting back the tree bark so that the latex can drip out into a cup. Her meticulous work can be seen in characteristic diagonal grooves running along the trunk of a rubber tree at about eye level. It’s hard, exhausting work that Aree does under the illumination of her headlamp.

As dawn approaches it is time to gather the cups, now filled with latex. Aree’s labour among her trees is done, but her workday isn’t over. She transfers the rubber into sealed buckets, which she then has to drive to her nearest purchasing point. There the latex is weighed and processed for sale. Here it will receive additives, and be run through a rubber-pressing machine to convert it into solid rubber sheets that can be dried and pressed into solid sheets and sent to larger processing companies. Here, Aree’s workday ends. But the journey of Aree’s rubber, still months from cushioning the tread of a tennis shoe or sealing the valves on a pacemaker, is just beginning.

The economics of smallholder plantations

Aree’s work supports her family, but being a smallholder is by no means a guarantee of a good income. Smallholders face numerous challenges that go beyond their physically demanding work, in a hot tropical environment. The trees that Aree spends the midnight hours tapping represent personal investment and risk, as they need to mature for about seven years before they can produce enough latex to sell.

The economics of rubber growing also pose a challenge for smallholders like Aree, who is dependent on the often volatile market price of rubber for her family’s financial security. The price of rubber can fluctuate drastically depending on a number of factors. There is also the fact that rubber trees cannot be continuously tapped, otherwise the tree will become unproductive or even die. This adds yet another level of uncertainty to the lives of smallholders like Aree.

If rubber plantations don’t provide enough income, it can lead smallholders to consider other less sustainable uses for their land in an effort to maintain their livelihoods, or even clearing their trees entirely.

PEFC is committed to supporting smallholders with technical assistance and certification so that they can follow environmental best practices and produce sustainably over the long term. The choice between protecting wild forest areas and the economic wellbeing of smallholders is a false one, as the former cannot be done without achieving the latter. That is why PEFC is engaging with smallholders like Aree, and that is why we are committed to piloting group certification and other options that allow smallholders to share the burdens of certification while still enjoying their benefits.

PEFC looks back on a game-changing year for sustainable rubber